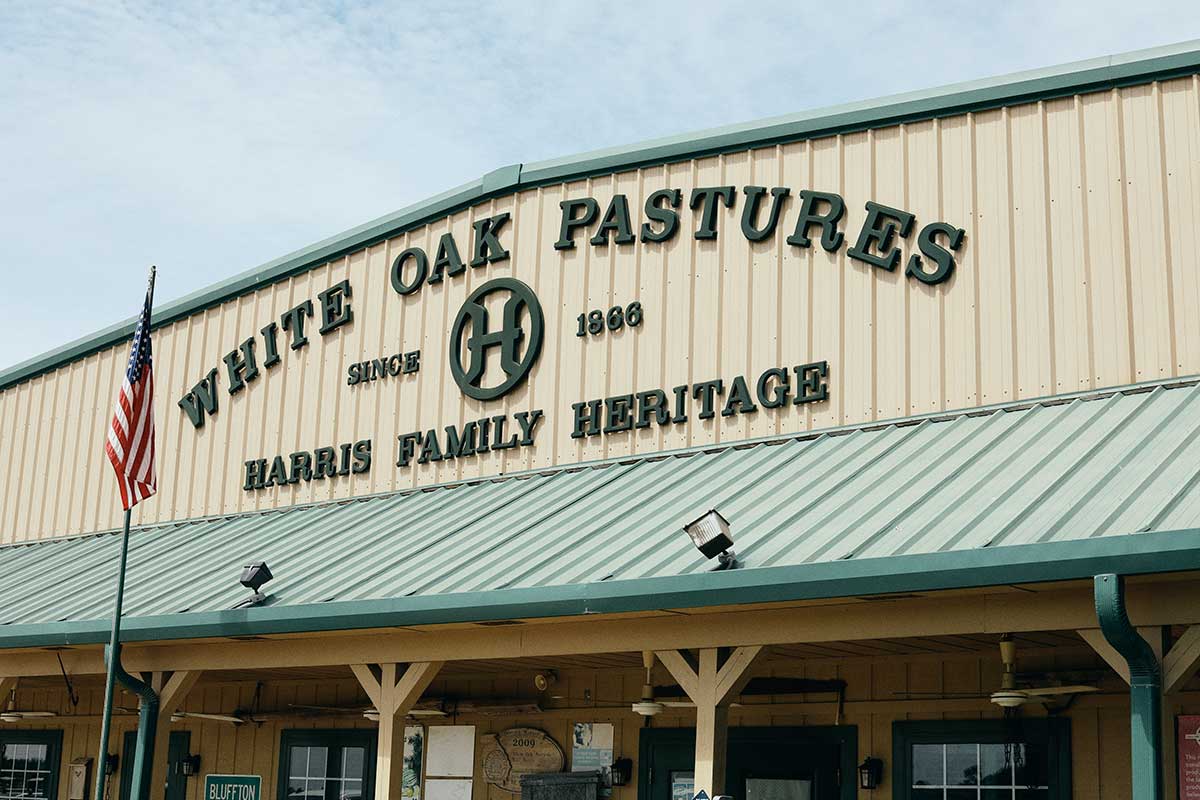 It can look very risky to get out of peanuts and corn.

We heard this refrain over and over during our time at White Oak Pastures. The entire agriculture system in the south, like in much of this country, is designed to reward the cultivation of commodity crops like peanuts, corn, soybeans, and cotton. With federal crop insurance, subsidized production costs, and export incentives, industrialized, centralized, commoditized agriculture may not have large margins, but the margins seem safe and steady.

Much of the land in the American southeast is extraordinarily fertile, and here in Bluffton, Georgia, the soil is especially rich. Combined with a steady 55+ inches of rain each year, spread out fairly evenly, the natural fertility of the region has led to intense agricultural cultivation over the centuries – after all, this is the Gulf Coastal Plain topsoil that once supported the Kolomoki civilization (which was at one point the largest population center north of Mexico). 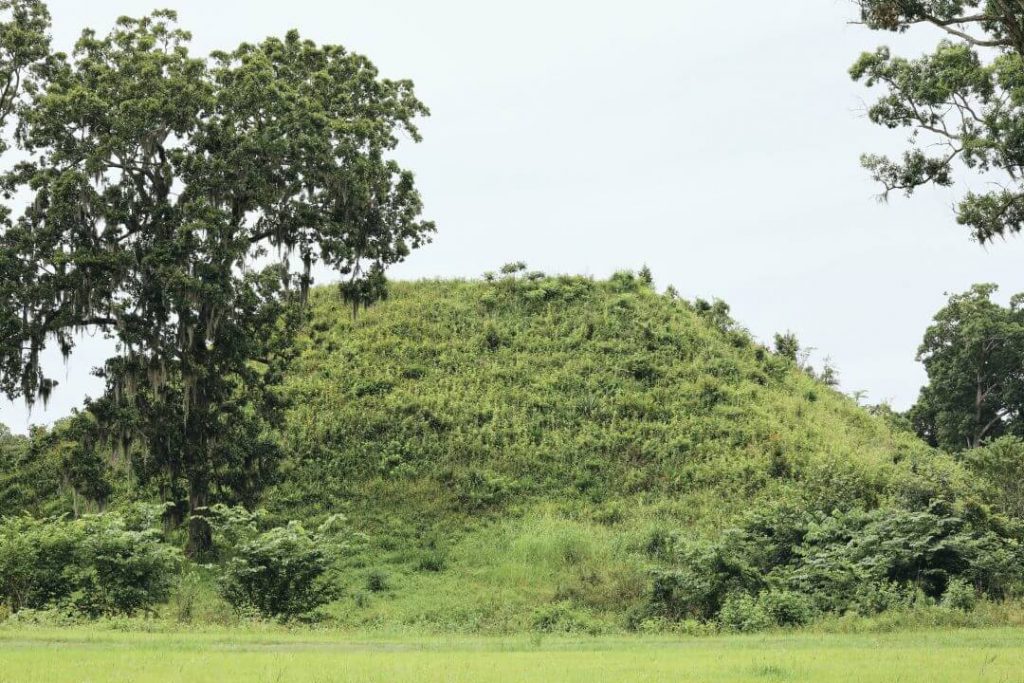 Kylan Hoover, hog manager at White Oak Pastures, has previously spoken about the natural resiliency of the southeast ecosystems and their non-brittle characteristics (check out part three of this story, here). He mentions this natural characteristic as perhaps part of the reason Allan Savory lacks as much of an influence in this region.

“I think Savory is more popular in the west, and the southeast had less buy in. But it’s not just a cultural thing, like some people like to say,” explains Kylan. “There’s a reason why land isn’t for sale as often.”

Kylan is talking about the innate productivity of much of the land in the southeast. The natural resiliency of a non-brittle ecosystem, combined with governmental incentives, tends to lean away from ideas of managed, bounded, holistic land use. The system has been designed for inputs pumped in, everything you can grow pumped out.

The easy path is not regeneration – but exportation. “If you had the profitability of USDA-subsidized, insured agriculture – and steady rainfall, like they have here – why would you take the risk of changing it?” asks Kylan.

Especially if, for example, there were other factors at play – a family, a tradition, an established way of doing things. Kylan, coming from an agricultural family himself, adds, “it’s crazy to do something different, in generational farms, simply because you do not want to be the one to lose the farm.” He’s dead serious. “Then you’ll be the one who all your descendents talk about – the one who lost the family farm.”

But say you had the land, you had the family tradition, you had that pressure to keep the business viable – and then you made wild changes. What if you take that risk? 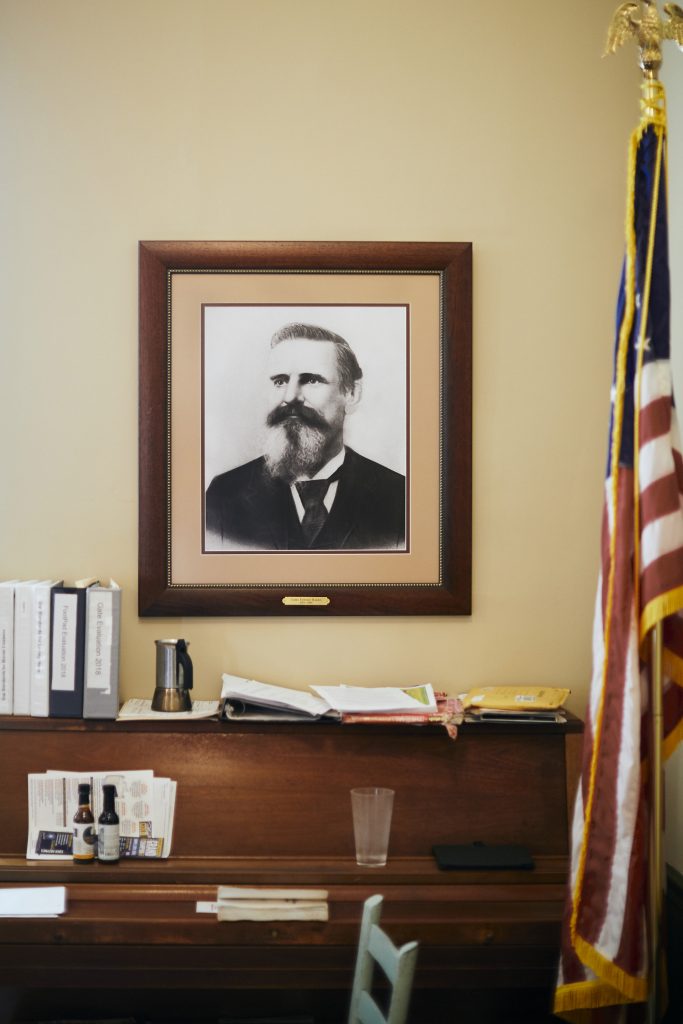 During our visit, driving around downtown Bluffton with Will Harris III of White Oak Pastures, I spot some tucked away coves and parks in between faded houses. Thinking of the mischief you could get into in a small town, I ask Will if there were many teenagers in the area.

Will is quiet, and gives me a long side-eyed look. “Nobody’s ever asked me that,” he responds. He looks thoughtful as he explains that when he was a kid, he would go downtown any day in the summer to find other kids to play baseball with. But by the time he was raising his own family, 20 years later, “you couldn’t even make a baseball team, even with every single kid in the town.”

During his and his dad’s lifetime, Will saw this lively agricultural community become dead row crop land. Writers (including me) have speculated for pages about what nudged Will down a different path, and the man is notoriously averse to nailing down one specific reason. But if you see that evolution in your hometown, and you want to return there anyway – maybe what you think of as “risky” starts to change.

Will did a wild thing – he started to get out of the commodity beef operation, the livestock equivalent of peanuts and corn, transforming his farm, over the course of years, into a completely different ecosystem. The Harris family farm was taking a risk – tearing up the playbook, and returning to a kind of radically traditional agriculture. 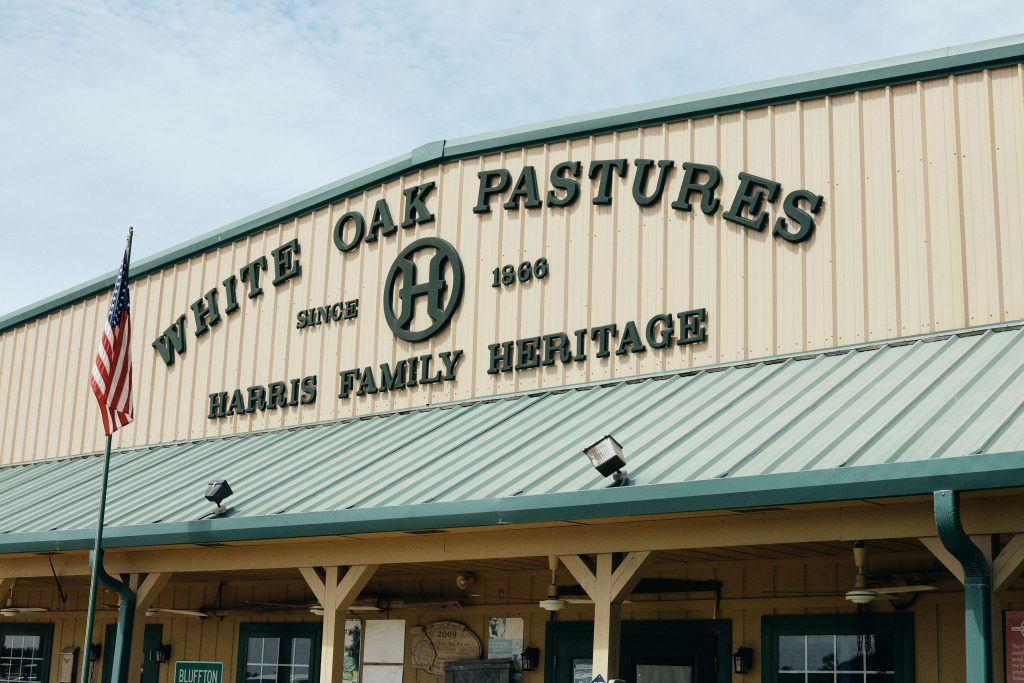 After touring around White Oak Pastures with Kylan to see the hogs, I sit with Kylan and Mark Harrison, the poultry manager, to take a break. We start to talk about their current focus: investing time and resources into training and reorganization of their departments. These two managers are drawing from quite a bit of experience in their fields to help further develop White Oak Pastures’ livestock programs.

Part of this is the practical training that every manager must do. Mark admits, “I tell everyone around me that they should be able to have my job in 24 months, because I may move on.” But upon closer inspection, the deeper level of their work starts to become clearer – and goes beyond basic training.

White Oak Pastures practices holistic, regenerative land management, including rotational grazing, perennial cropping, and natural cycles of fertilizer and pest control. Many principles of this type of agriculture, while not exactly common today, were widespread just a few generations ago. And while traditional practices are growing more popular today, in the last few generations, some knowledge has been lost.

“The issue with the [regenerative agriculture] industry is that most people who have generational knowledge about farming are on the conventional side,” says Kylan. Many multi-generational family farms use industrialized, centralized, commoditized methods, because of the perceived risk of “getting out of peanuts and corn”. In contrast, within the regenerative agriculture space, you frequently find many farmers who are agricultural transplants, career changers or well-meaning activists who may not have a background in agriculture.

But White Oak Pastures is an example of a small but growing number of family farms who are transitioning from conventional industrial farming to more regenerative methods – a generational farm, trying to turn in a completely different direction. This background puts White Oak Pastures, and its managers, in a unique position.

Every farm (and organization for that matter), is operating under some sort of guidebook, a type of Standard Operating Procedure. Whether written out or not, general guidelines for how things are done need to be passed on, to ensure continuity in operations across seasons, people, and generations. Family farms, usually implicitly, have a standard operating procedure – one generation trains the next. Farm families pass on how things are done, transmitting experience and rules.

But what do you do when you want to do something differently than your parents did? When Will Harris decided to leave commodity cattle production, he wasn’t just changing his production methods – he was leaving behind the playbook that his father had been writing on the farm.

And when you tear up the playbook of a generational farm, you need to write a new one – one that refers back to the traditional knowledge in your family and also incorporates new developments in the understanding of natural systems. This is the task that Will, his daughters, and managers like Kylan and Mark are working on. They’re rewriting the rules for this kind of farming – and these new guidelines are focused on regenerating.

White Oak Pastures is constantly trying out new systems, experimenting and completing trials of new projects. Talking to Jacqueline DeWitt, the farm’s compost and many-other-projects manager, over a farm lunch, she mentions how many of her projects overlap with a number of different departments.

“Everything is so interconnected at White Oak Pastures,” says Jacqueline. “If I want to make a small change in the compost process somewhere, I need to talk to so many different people – feeding and grazing and birthing and the kill floor – and see how it all fits together, to get everyone on the same page.”

This system is more complicated than peanuts and corn. And it requires a lot more collaboration, effort, people – and, as the operation grows, new rules.

The new playbook at White Oak Pastures contains a lot of new, and old, ideas, all aimed toward the regeneration of the land and improving the health of the soil, animals, and people involved. Managers like Kylan and Mark are establishing new grazing rotations, breeding methods, and feeding systems. The farm’s operating procedures include a focus on achieving “zero waste”, using every part of the animal possible and returning whatever cannot be used back to the ecosystem. Within the community, White Oak Pastures invests in farm employee retention initiatives like hosting repetitive motion training for workers in the butchery plants or looking into starting a child care facility in Bluffton.

But the biggest tear-up-the-playbook moment has come in the form of a recently released study from White Oak Pastures and a third-party ecological outcome verification firm. The study took a comprehensive look at all carbon generating and sequestering activities of the farm, and found that, overall, White Oak Pastures sequesters more carbon in the soil than its cows emit during their entire lifetimes. This news flew in the face of the expectations that most people have regarding livestock and climate change. The results of this study are still echoing around the agricultural world – making the move toward regenerative, holistic land management suddenly seems a little less risky. 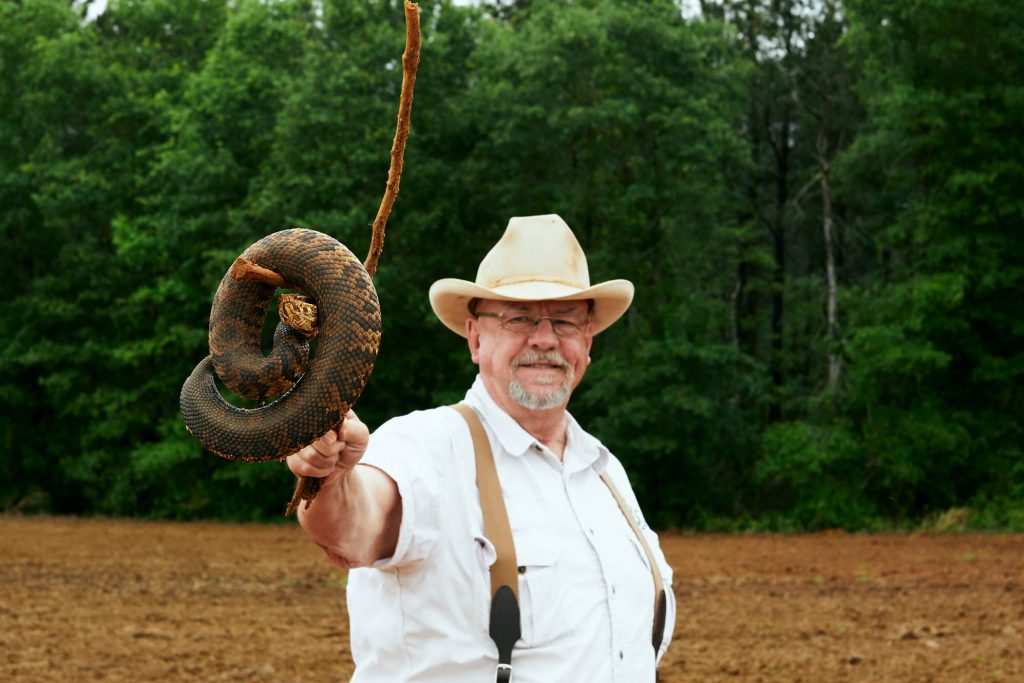 Our favorite picture of Will Harris – it may have little to directly do with regenerative agriculture, but it tells you a whole lot about a man willing to pull over his truck to move a snake off the road. What were you thinking was risky, again?

“Everything here is a work in progress,” says Will. “The to-do list is freaking incredible.”

He continues. “Sometimes I have to say, ‘you know, we’ve been at this 153 years, maybe we ain’t doing this today.'”

Writing a new playbook, one based on regenerative agriculture, is a never-ending process, and maybe it doesn’t need to get done today. But taking the risk in the first place, seeing the faulty logic behind the rules that you’ve been given – and acting on it – is the first step. This is what can lead to entirely new playbooks, ideas, and contributions from a whole community. And these are the playbooks that may end up influencing people far beyond your pastured acres.

“Everything has gotten more complex,” Jenni Harris declares. We’re talking about the overlap between pasture management, soil regeneration, and the farm business, and she’s pulling in facts and figures from every which direction. “We’ve always had a lot going on, but because we had resiliency in our minds and attitudes, we didn’t say ‘fuck this’,” she recounts. “We said ‘we’ll figure it out’.”

“We’ll figure it out” seems to be the perfect response to anyone telling you that “it’s risky”. At White Oak Pastures, the Harris family frequently cites their family prayer of “plenty of good work and the strength to do it”. Writing the new playbook will certainly give them the good work, and, judging from their never-ending ideas and resilient attitudes – it seems like they have the strength to do it.

This series was created for the Regenerative Organic Alliance, with the cooperation of White Oak Pastures, to explore the human side of regenerative agriculture. This is Part Four, so if you want to read more, be sure to check out Part One, Part Two, and Part Three.